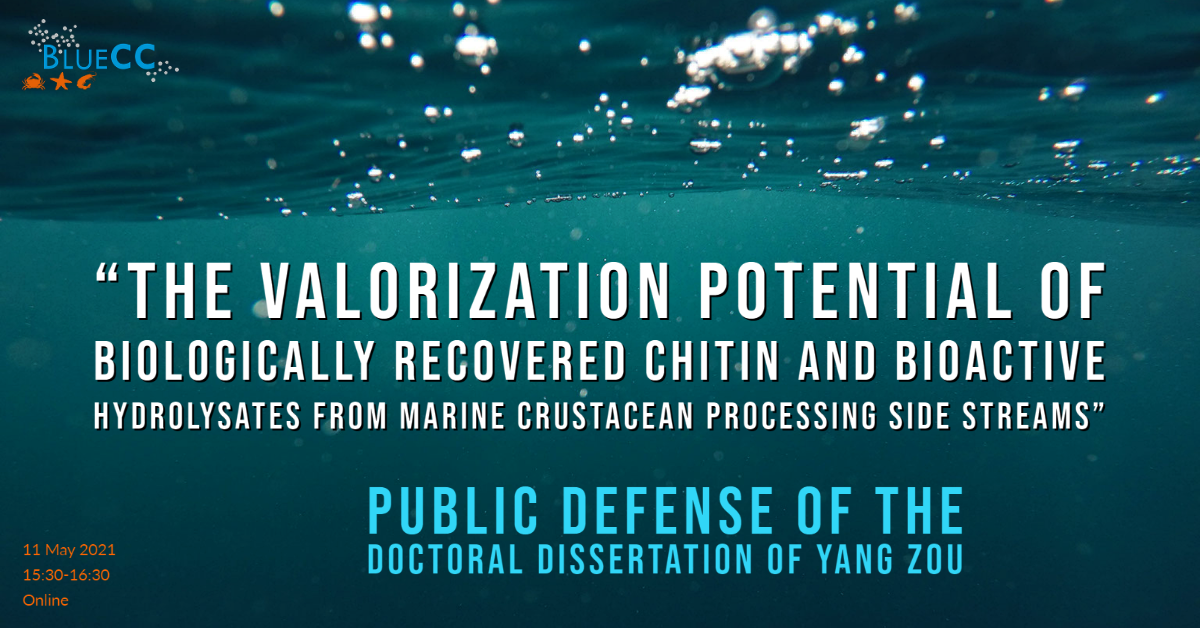 Yang Zou is a valued member of BlueCC and is involved in WP2. He started his PhD working at ILVO on the BlueShell project.

We are pleased to invite you to the public PhD defense of Yang Zou. His PhD is titled:

The defense will take place on Tuesday 11th May at 15h30. To attend the public defense, please follow the instructions in the official invitation from the Chancellor of Ghent University.

Abstract of the doctoral research:

Although marine crustaceans have a high economic value and a significant nutritional value, a considerable proportion of marine crustaceans cannot be directly consumed by humans, ending up as processing side streams in the seafood industry. These side streams still contain valuable molecules such as proteins, chitin, and carotenoids. Compared to traditional chemical methods, greener technologies are the alternatives to extract those compounds.

Yang Zou was born in 1982, Harbin, China. After graduated from medical school in 2006, he worked as a surgeon at the Department of General Surgery, the Fifth Hospital of Harbin, China. In 2012 – 2014, he followed the Master program in Human Nutrition at Ghent University. In his master thesis, he studied the topic: “Impact of different preparations on the mutagenicity of meat products during digestion as evaluated by the AMES-test”. After graduation, he worked as a researcher on two projects related to food waste valorization: VALORIVIS and VALORFOOD at UGent Campus Kortrijk. In 2017, he started his PhD at research unit VEG-i-TEC, UGent Campus Kortrijk and ILVO based on an European project, BlueShell: Exploring Shellfish By-Products as Sources of Blue Bioactives. During the PhD-study, he successfully guided two bachelor students and has three papers published in peer-review international journals.